What a memorable, eye-opening and wonderful few days in Hong Kong.


I was in Kowloon, Hong Kong from Wednesday through until Sunday helping with a international school sports tour. 70 of our young sportsmen and women versed Indonesia, Malaysia, Vietnam and Hong Kong in what would be the third annual tournament of its kind.


It was such an emotional couple of days with countless triumphs, a few defeats, laughter and tears. My highlights were the basketball and netball finals - who knew a school sports game could be so gripping!? I was on the edge of my seat until our teams claimed victory in the last few minutes, resulting in a deafening roar from the rest of the students supporting.

My other highlight was during the prize giving, just as Hong Kong was announced as the overall winner. Instead of acting disappointed or groaning as most teenagers (and lets face it, most adults) would have done in not winning the gold, our teams immediately stood up to give Hong Kong a standing ovation. Completely gracious in defeat.

I think back to how I behaved aged 11-14 and I cannot even begin to compare to how these kids are. The camaraderie, sportsmanship and friendships that developed over the few days were clear to see and the students have all returned to Singapore standing that little bit taller. I was blown away by how respectful each student was throughout the trip and well they conducted themselves. It was incredible to be part of the tour and I feel so proud to work for a school who's students are such well-rounded and mature individuals.

Before the kids arrived a colleague and I had one free evening and the best part of a day to enjoy and explore Hong Kong. We caught a boat from Kowloon to the Island where we ate the most delicious dinner at the Caprice Bar in the Four Seasons Hotel. We chose 'a little bit of everything' cheese platter along with a selection of tasting wines and port.

Once our bellies were full we headed over to the Mid-Levels. The Mid-Levels is a 3km walkway/escalator system running up the side of Victoria Peak. Apparently the escalators travel downwards in the mornings to take commuters to work, and then up in the evenings to take them back again. All along the walkway are cool bars and restaurants with people spilling out of the open doors on to the street. As it's Halloween at the moment, everywhere was decked out with pumpkins, cobwebs and bats. The whole experience of Hong Kong was a far cry from Singapore. Hong Kong felt grittier, more authentic and had heaps of history and character.

The following day we pushed our hangovers to the backs of our minds and trekked for two and a half hours along the Dragon's Back Trail. The views were out of this world - with grassy mountains, the endless ocean and then the juxtaposition of skyscrapers in the distance. The sun warmed our skin and para-gliders floated around above us. It felt so far removed from the hustle and bustle of the Mid-Levels or the fresh food market we'd visited the day before. 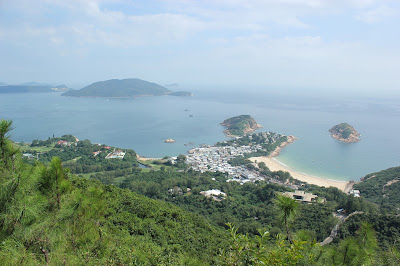 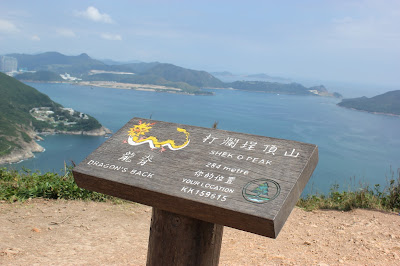 We ended our trek at Big Wave Bay and cooled off in the sea before heading back reality - AKA, 70 tired but excited students who had just arrived at the hotel. 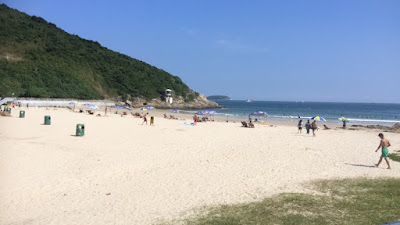 I've come back to work this week completely exhausted, but with a new lease of life. I learnt such a lot in the short time I was in Hong Kong and I'm going to remember those few days forever.