Week 1 - getting to know the Garden City

I arrived in Singapore on the morning of Saturday 23rd April which meant Phil and I had a full weekend to familiarise ourselves with the city together. A friend from the UK was also in Singapore for business so the three of us spent an excellent Saturday night having drinks down at a bar with a microbrewery called Brewerkz on Clarke Quay followed by a boozy brunch at Tanjong Beach Club and a long sunbathe on Sentosa island the next morning. Safe to say we are all thrilled that boozy brunches are a thing here too!

I was left to my own devices for the rest of the week as Phil was back at work. I'm happy the MRT (tube) system is even simpler than London so I had no trouble finding my way around China Town, Tajong Pagar and Tiong Bahru and eating at the delicious (and cheap!) Hawker Centres.

I also spent a day in the Botanical Gardens. It was easy to while away the day here as there's a lot to see - it's huge. I could have listened to the sounds in the Rainforest Garden for hours. In fact, maybe I did. I'm keen for Phil and I to go back together, would be a great place to take a picnic and a good book. 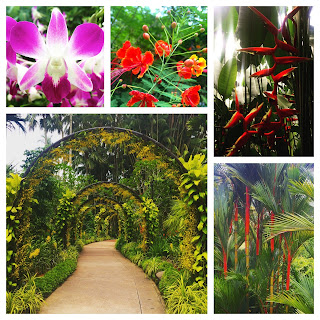 Aside from seeing the city, I've also tried to make good use of my time in finding a job out here as I'm getting itchy feet to find my own thing ASAP when we make the move properly together at the end of June. This week I met with a PR professional and the Chief of Singapore Government Communications who have both agreed to put me in touch with some companies who might be looking to recruit. I've also got an interview lined up for next week!

We have been trying to cram lots in to our evening's together and get to know the night life of the city. We've had two delicious dinners this week - the first at Me@Oue which is located in one of the towers in the City and has amazing views over Marina Bay Sands, and the other was a cute little Italian called Paolo Bistro Bar just up the hill from The Rochester Park Hotel by Buena Vista MRT. Would definitely go to both again.. and again.

On Wednesday night we met a few friends at The Exchange for drinks. The Exchange reminded me of a banker bar in the City of London; a lot of Western men in white shirts and a lot of booze..! After the Exchange we headed to Club Street, which confusingly doesn't have any clubs, but has a good array of eateries and bars. We then stumbled upon some live music at a place called Octapas on Clarke Quay, followed by an evening of repetitive Pitball tracks at Attica. Clarke Quay seems a good place to be of an evening in Singapore - a huge variety of places to eat and drink and a great atmosphere right along the river front.

The other activity we crammed into our evenings this week was the famous Night Safari. Neither of us really knew what to expect as we are both quite anti the idea of keeping animals in captivity, however we were happy to see the animals had large enclosures and the Safari workers/tour guides assured the animals' welfare was well looked after and protected.

It was a great first week, and in a way quite good Phil was working all day so I could familiarise myself with the city properly. That said, I'm looking forward to Phil being off next week so we can spend some fun days together!