For the first time in our lives, Phil and I chose to spend Christmas away rather than at home with our families. It was not an easy decision for me as I love the opportunity Christmas brings to have everyone together; not to mention all the delicious food, drink and cheer. However, having been home twice already this year we thought it a good time to try something different.

A few friends had recommended Tao - a boat tour from El Nido to Coron in the Philippines. We booked the 5 night trip over Christmas followed by a few nights in the Coron area to do some diving. It was hands down one of the best things we've ever done and I can see why it comes so highly recommended.

Like most of the less touristy idyllic places, our little area of the Philippines was a bit of a mission to get to. We caught our first red-eye flight to Cebu, then a second to Puerto Princessa, then finally a 5 hour drive to El Nido.

On registering for Tao you have to write a little bit about yourself and why you want to join the trip. The website makes it clear that the trip isn't for everyone and tries to arrange the groups so that 'like-minded' people are together. We were lucky in that the other 22 people were lovely and there's definitely a good bunch to keep in touch with. 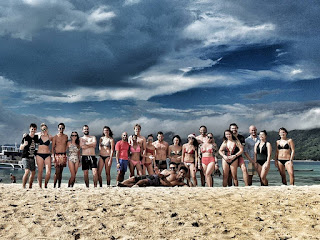 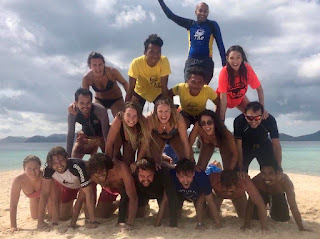 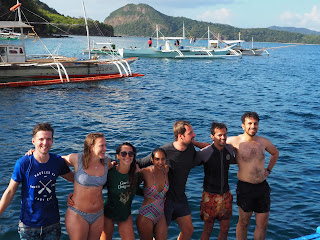 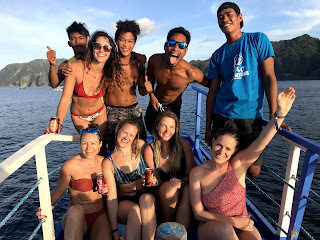 Tao doesn't follow a specific itinerary or route. The boat stops at different islands throughout the day so you can snorkel, lie on the beach, play volleyball, cuddle the adorable puppy Moana, read a book, or wax lyrical with new pals. 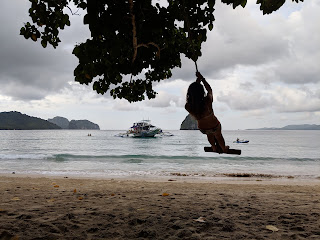 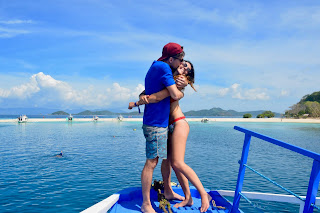 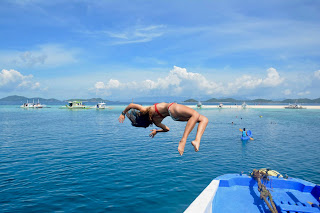 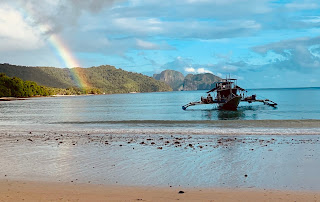 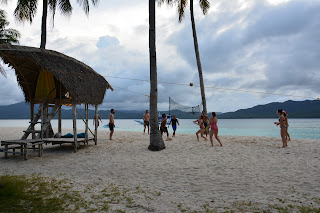 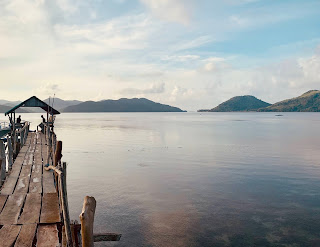 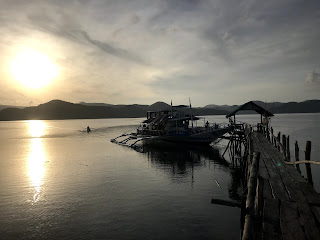 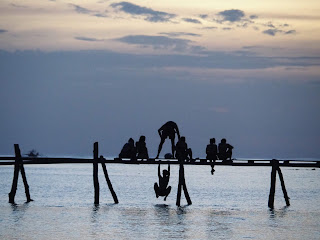 This was our little route...

Along the way we caught some tuna from the back of the boat which was killed, prepared and eaten in all of 30 minutes. The freshest sashimi ever. 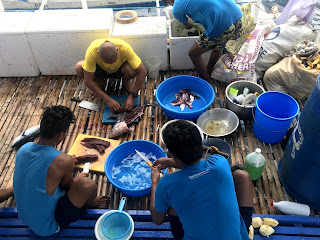 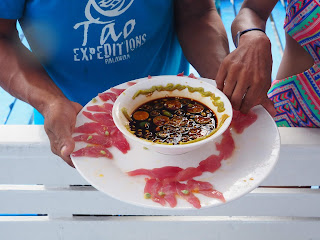 On Christmas eve we sat around a fire and sang carols. A few of us also walked around the island and shared a few songs with some local islanders which was pretty cute. 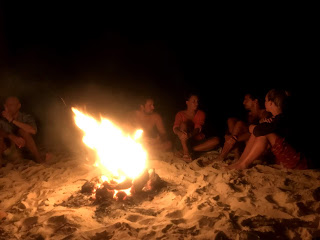 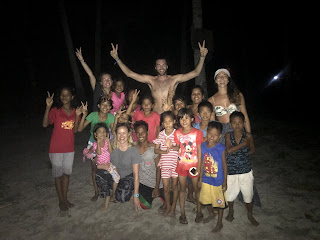 We woke up on Christmas morning like any other day of the trip. Even though I tried my hardest, it really didn't feel like Christmas at all. Not that I'm complaining, as we were in the middle of absolute paradise. 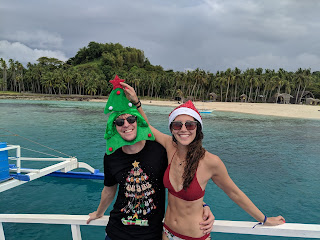 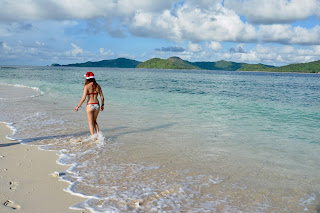 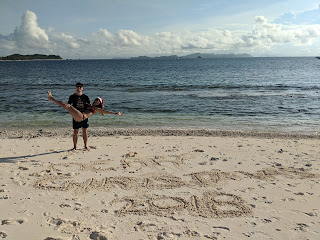 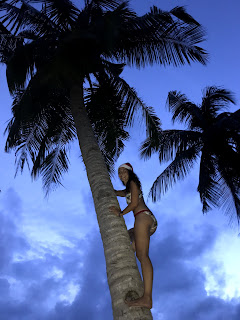 We ended our tour in Coron and stayed at a great hotel called Coron Bay Area. The first thing I did was have a massage in my room (priorities), then headed out for drinks and dinner with the Tao crew.

We were only in Coron town for one day and were told a typhoon was coming which would stop all tours and boats to other islands. Luckily we managed to organise a private tour to a couple of places recommended online: Twin Lagoon and Kayangan Lake.

The Twin Lagoon was very beautiful and peaceful, but Kayangan Lake was definitely our favourite of the two. 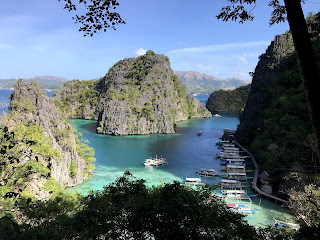 Kayangan Lake was slightly marred by the large number of tourists there when we arrived. We began a climb up rocky steps until we reached the end of a long queue of Asian tourists. Confused why there would be a queue for a lake, I went ahead to check and it transpired that the queue was in fact for a viewing point photo opp. Crazy, but good for us as it meant we could manoeuvre around and see the lake.

The lake is well worth a swim but you need to bring a mask and snorkel with you to get the best of it. The water is crystal clear and the underwater rocks are stunning. There's also a little cave along the side which is pretty cool.

We stayed in the lake long enough for the large numbers of tourists to disperse on their group tours. It's definitely worth doing the private option as we did as it means you can go at a less busier time and go at your own pace, and it only costs a fraction more.

We ate a lunch of fresh fish and veggies on our little boat then headed back to Coron. With a whole afternoon at our disposal, we donned our trainers and sports gear and began the 742 steps to Mount Tapyas. I was prepared for a challenge after reading another blog post about the walk, but it was fairly painless and we were at the large CORON letter in no time at all, meeting some of our fellow Tao crew at the top by chance.

After a leisurely walk back down, we caught a 30 minute tricycle to the Maquinit Springs just in time for sunset. The Springs were wonderfully warm and the perfect place to chill out with friends as the sun went down. An hour was probably enough for us all before we turned into prunes and overheated.

There was still rumour of a fast approaching typhoon the next morning so we were slightly concerned about getting our transfer over to Sangat Island. We waited a short while in anticipation and were thrilled when we were collected and taken to the most beautiful little island resorts I've ever seen. It turned out that many of our friends weren't able to arrange any transportation off the island so we were very lucky!

I recommend alot of places, but I really cannot recommend Sangat Dive Resort enough. Even if you aren't a diver you'll have an amazing stay there, trust me. Be warned that it is a little on the pricey side, but in my opinion, very worth it. 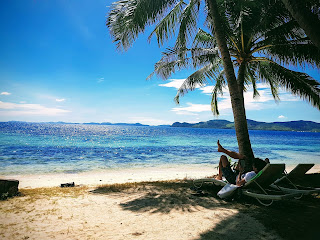 As we arrived on the island we were greeted by some the friendliest staff I've come across, and taken up to our villa on top of the hill. It was surrounded by jungle and warned to keep our belongings inside to avoid the thieving monkeys!

We had long enough to get changed into our dive gear and we off out to dive the Morozan Maru - an English passenger liner which was captured by the imperial Japanese navy and used as an auxiliary cargo vessel during work war 2. It was sunk, along with several others in 1944. 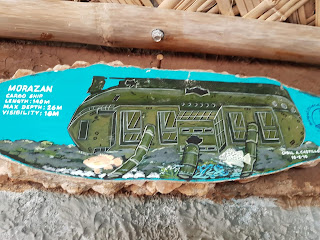 The next couple of days we dived the Olympia, Okiawa and Irako. All fantastic in their own right, but nothing compared to the Morozan. We dived the Morozan once more on the last day. Ducking under and over debry, squeezing ourselves into tiny gaps, swimming up in to an air pocket, and losing our dive master...

Certainly the most interesting diving I've ever done. Thanks to the typhoon stopping other travellers, we had each dive site to ourselves. I'm not sure we would have quite the same positive experience had their been other divers 20m down disturbing the haunting quiet of the wreck.

The last night of our stay was new year's eve and Sangat had arranged a huge buffet dinner, decorated the area with fairy lights, blasted the music, and arranged games for us all. It became clear that alot of the guests fancied a chilled night, but Phil and I got carried away with shots, more shots, skinny dipping and more skinny dipping. 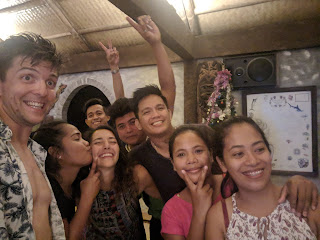 I'm now writing this at the end of our trip and I can hands down say that this has been one of the best holidays we've had. But at the same time, it hasn't really felt like Christmas at all.
Posted by Rowan at 05:14 No comments: