Loving the Lights of Singapore

I had my first taste of Wednesday ladies night this week with a couple of girls from work. We went to the martini bar at the Grand Hyatt Hotel where we had lychee, berry, ginger, basil, mint, citrus and espresso martinis all half price, followed by a bottle of champagne courtesy of some guys in the bar. It was a good night. The drinks were delicious and the beef sliders were so good we ordered 4 each.

I'm glad I'm getting to know some colleagues my own age at work. One of the girls I went out with is part of a netball club, so in an effort to try some more new things, I've signed myself up to play a match in a couple of weeks time. Not sure I remember any of the rules which doesn't bode too well...I'd best get practising!

Another night after work Phil and I went to Din Tai Fung and gorged on pretty much all the dumplings. I can't rate Din Tai Fung highly enough. It's super cheap, delicious and you'll never be far from a branch as there about 20 of them across the island.

We were eating at the MBS branch, and as luck would have it, just as we rolled out of the restaurant the MBS light show began. We've seen the show from almost every angle, but hadn't gotten around to seeing it the best way - sitting on the deck in front of the fountains. Light was projected onto the water from the fountains which told a story of childhood, love and family life, whilst music played from speakers either side. It was kind of mesmerising. At the end of the display everyone gave a huge round of applause... and this is something that happens every single evening in Singapore.

After the light show we walked over to Supertree Grove and watched the Garden Rhapsody. I hadn't seen this before either and, once again, I was completely blown away by how beautiful it was. My parents are visiting early next year and I can't wait to show them - they're going to love it.

It's the mid-autumn festival at the moment and in celebration, the Gardens by the Bay have been decorated with lanterns of all shapes and sizes. So after the Garden Rhapsody we wandered around looking at them all - here are some of my favourites: 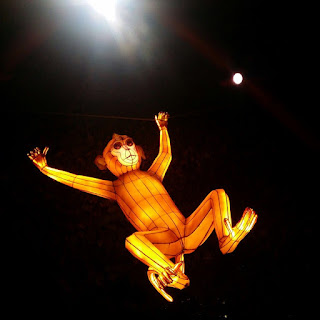 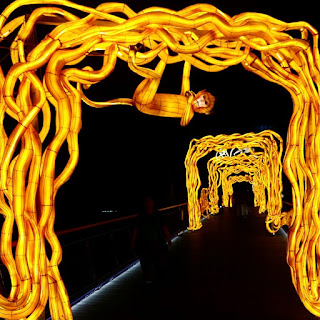 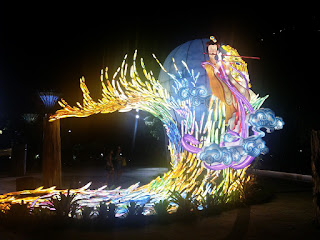 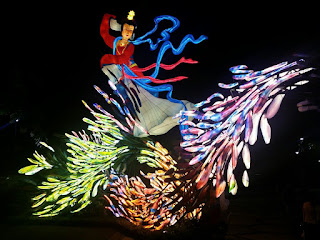 The mid-autumn festival also means it is time for Moon Cakes! If you  haven't tried them or don't know what I'm talking about, then fear not - you are not missing out (although I should caveat that by saying that some people really do love them, I'm just not one of those people!). If you don't now what they are, Moon Cakes are pastry, filled with red bean or lotus paste, with an egg yolk in the middle. They're dense, fatty, sweet and salty, and at the moment they can be found absolutely everywhere in Singapore.

Phil and I are diving off the Malaysian island of Tioman this weekend to make the most of the Singapore public holiday. I can't wait! We did our Open Water course in Thailand in May, so are now progressing to get our Advanced Open Water qualification. We need to show proficiency in underwater navigation and deep diving, as well as peak performance buoyancy, fish ID, drift, night and wreck diving. Eek!!